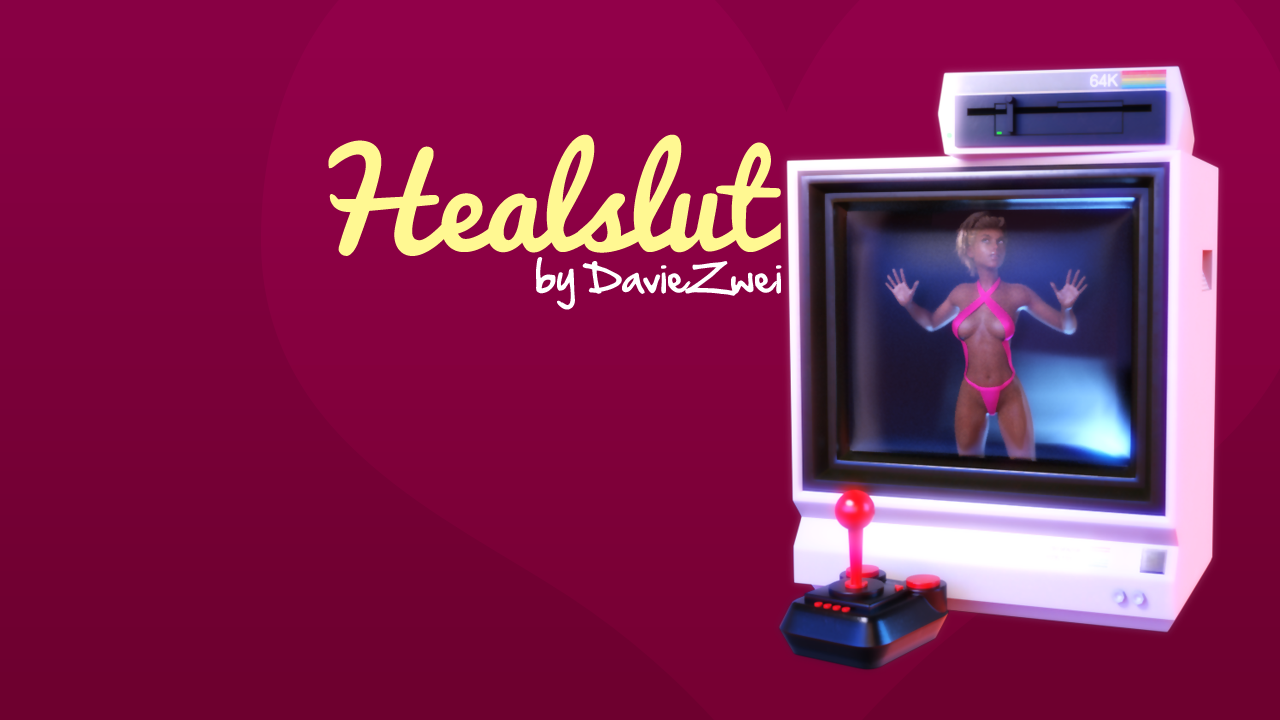 Jack in, jack off!

You're a beta-tester for the super-popular MMO game Powerful Order Online (yeah, POO). After failing to find a place in a decent end-game guild with your shadow-stalking dagger-wielding elf, you start to worry about the future of your job. But thankfully, you're invited to test the brand-spanking-new expansion of POO, MEGAREAL! Of course, because this is a work-in-progress, there may be some fairly serious glitches...

For anyone interested in supporting me in continuing creating this game:
https://patreon.com/dizzy

By request, I now have a SubscribeStar page here:
https://subscribestar.adult/dizzy

Upon taking up the opportunity to join the brand-spanking-new expansion to the super-popular MMORPG Powerful Order Online as a beta-tester, you find yourself locked into the very odd (and apparently exclusive?) class of Healslut. Just how will you handle the power... and consequences?

NOTE: The route of going to speak with the miners is not looped in yet so it still ends early. I am working on that now as well as finishing the next morning with Harmony and spending the night with Roar(+/-Lel). If you would like to see the latest story content please choose a different option than going to talk to the miners when you're in Porttown.

This update contains content addition for the 'free-use' route that Sparkle can agree to while serving as 'loot puppy' and therefore will only appeal to those interested in those paths and activities. But worry not, the next big update will include more comprehensive content for the various dominant and submissive paths!

Notice: This is a '(hopefully) fun little sidequest' update and does not contain any sexytimes. If you're in it solely for the spank, you may want to wait for the next one to play through!

Can't believe I never reviewed this game. I've been playing it for years.

Lots of reviews below mention how the main character is unlikable in real life. That is not a problem for me, I kinda like to play as a character that isn't perfect or too nice or just a proxy for me to slip into. To me, that makes it more interesting.

I simply LOVE it when YOU are the most feminine and beautiful character in a game and there is almost no competition. Awesome!

But now, the nitpicks...

First, the comedic bits are hit-and-miss with me. I like it how the game can go from comedic to dramatic in the drop of a hat, though. But the funny conversations sometimes drag on a bit too long, and the humor doesn't always click with me. But it still doesn't detract from my enjoyment of the game.

I think if I have one main complaint about Healslut it's this... the game puts you into the role of the most girly, femme, gorgeous fantasy character, it makes you ultra-feminine and I love it, but among the rest of the team of adventurers, there is no one that is ultra-masculine, or even just masculine in a traditional way. While I do enjoy diversity and appreciate having the choice of non-traditional romantic partners, I'd love it more if at least ONE character in the team were a traditional manly hunky that you could romance. But no, everybody in the team is kinda feminine in one way or another.

I end up with Roopa, the she-male orc, because she is the closest to being manly. And it's sexy enough, but still not ideal, IMO.

It is a very well made game and conversations between the MC and others are actually funny.

I noticed one missing image in 0.69d, but it didn't stop gameplay since one could just ignore it:

This is the one game that has me chuckling more often than any other I've played from the site.

I also found the backstory for Twig, and the music and accompanying images quite touching and maybe a little bit epic.

Okay, this is probably going to be a bit of a long review, so I'll give a quick TLDR, but know I specifically created an account and made some forum posts just to review this game, so that should speak volumes on its own.

TLDR; This game has a slow start, and an *EXTREMELY* unlikable main character IRL, however the online persona you spend 90% of the game with is much more charismatic, and you actually get to sort of shape their personality. Not a whole lot of actual sex scenes for a porn game, and they're not really animated, but the writing once the creator started to catch their stride starts to get really good. Like, better than any other game I've played on this site, and I've played A LOT of them. It has its quirks, as most games on this site do, and some genuinely cringe moments, especially the overused Seinfield-esque "We're both idiots misunderstanding each other and prattling on for way too long about it" ""jokes"" that keep happening (I use that term extremely loosely) but the writing, breadth, and dedication to the CYOA-style gameplay is so well done it absolutely makes up for it.

Now, I downloaded this game for the first time a year and a half ago, played it for 10 minutes, and immediately uninstalled. I straight up hated it. The "nerd" character was abrasive to say the least (there's even an off-handed comment later in the game that implies they're autistic, and I just find that to be in poor taste as an actually autistic person, because their behavior is more like a bonafide sociopath than an autistic person) I mean... seriously, every interaction the character has in real-life is BAD. Just, genuinely downright terrible. It's almost the entire reason I give this game less than a 9. If you've played it, you know what I'm talking about, and it makes no sense to me how there seems to be little to zero character development in the IRL player by the time they meet Jane/Janie. Like, I sat there feeling genuinely terrible while the main character berates and insults practically everyone they interact with. Like, saying "fuck you" for no reason to the burger girl. WHY? I gave the game a second chance because I saw I could play with the "nerdette" Simone, thinking it would be better, and it *kiiind* of was? I guess? But still, it was really bad. If I had one serious recommendation for the creator of this game, it would be to make simon/simone more like an actual person, than this like... idk, trope of anxiety and bitterness?

I'm gonna stop there on that subject, because I could write an entire essay about how that character could've been written better, and how their depiction is almost insulting to people who are similar to the stereotype depicted, but it seems to me all the game's focus was elsewhere and the creator just went with whatever they felt would move the plot forward and justify the moments Sparkle is like "no, no, I'm terrible with people" even though she's a social butterfly and just never gave it a second thought.

Now, once you get into the actual swing of the game, probably around act 3 or 4, it starts to get really engrossing. All the characters in the game world are well-fleshed-out, and have strengths/flaws you can identify with and latch onto as a reader. There are easter eggs, references to popular media, and call-backs to previous encounters that really make this game shine and make you feel like your decisions as a player matter, which is what I play games like this for, really.

I particularly enjoy the multiple different routes you can take with different characters, which not only allows you to choose who you'd like to pursue, and never forces you into a non-consensual sexual situation without repeatedly telegraphing it and giving you a chance to avoid it, but also lets you build a muthafukin harem if you play your cards right, with some of the most attractive characters in the game. (I hope the newer updates allow you to include Harmony in this dynamic, as it seems the later acts sort of conflate being able to be with Panki/Lel and Skylark with being with Harmony as well, even though you expressly are given permission by Panki to be with her. Just seems like a missed opportunity, and I also find it confusing how Harmony seems to get left out of dialogue frequently even though she's SUPER entertaining to listen to speak, seems very wise and insightful, and will sometimes just be... standing there while everyone else keeps talking)

The game gives you a lot more options for customization now than it did when I originally played as well. You can be a futa, trap, or regular ol' healslut, and knowing which you're getting is straightforward and changable. You can even use the redhead "backup" model (my personal fave) although it will sometimes glitch a scene (especially on the pirate ship with the blanket or sword). You even choose your spells, which have different situational advantages/disadvantages, and if you choose the fairy spell, you can customize that a bit too. Very very nice attention to detail there.

Overall, I'd really recommend this game to anyone who likes the long-form more plot-driven games, especially those that enjoy CYOA RPG elements. Just don't expect a lot of graphic sex scenes. I honestly expected more of them from a game where most people are partially nude, and my guess would be that a lot of them only really appear on the "free-use" path, which is just too rapey for me to stomach, but still... More harem content please!

A game that really grows on you.

I think the game makes a particularly bad first impression. The main character in his real-world form is extremely unlikable. He's immature, homophobic, just an all-round snivelling loser. This game also has an inordinate fondness for questionably funny "Tweedledee & Tweedledum" style comedic bits that go on and on, which takes time to get used to.

But once you start getting deeper into the story, a lot of the annoyances fade away as the generally high quality of the writing asserts itself. Your party members are all interesting and often endearing and Sparkle, the MC's enforced in-game persona (the titular healslut), is much more likable, personality- as well as appearance-wise. There's also bits of genuinely clever meta writing later on that I don't want to spoil.

And of course, the strongest part of the game is the premise itself, that of being a healslut in a VR MMO. I'm particularly enamoured with the free-use path. I think a lot of games that promise non-con/reluctant content tend to cop out of actually delivering on the premise - usually, if you insist you don't want it, they allow you to back out. But here, if you make a key decision at one point in the story (it's abundantly telegraphed), the right to refuse is taken away from you from that point on. You can continue to withhold verbal consent and insist you're not into it (that is the fantasy) and your party members will ignore your protests and 'force' you into sexual situations anyway. That's great. It's a perfect distillation of the appeal of the submissive healslut fantasy, at least for me.